Many people know what the words Loyalty, Duty, Respect, Selfless Service, Honor, Integrity, and Personal Courage mean. But how often do you see someone actually live up to them? Soldiers learn these values in detail during Basic Combat Training (BCT), from then on they live them every day in everything they do — whether they’re on the job or off. In short, the Seven Core Army Values are what being a Soldier is all about.
Click the title below to see the Values, Creeds, and Songs. 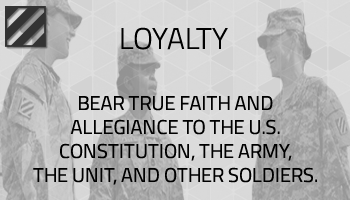 Bearing true faith and allegiance is a matter of believing in and devoting yourself to something or someone. A loyal Soldier is one who supports the leadership and stands up for fellow Soldiers. By wearing the uniform of the U.S. Army you are expressing your loyalty. And by doing your share, you show your loyalty to your unit. 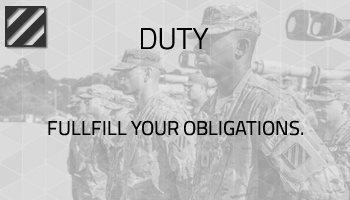 Doing your duty means more than carrying out your assigned tasks. Duty means being able to accomplish tasks as part of a team. The work of the U.S. Army is a complex combination of missions, tasks and responsibilities — all in constant motion. Our work entails building one assignment onto another. You fulfill your obligations as a part of your unit every time you resist the temptation to take “shortcuts” that might undermine the integrity of the final product. 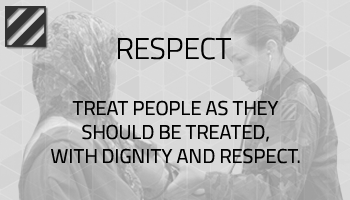 In the Soldier’s Code, we pledge to “treat others with dignity and respect while expecting others to do the same.” Respect is what allows us to appreciate the best in other people. Respect is trusting that all people have done their jobs and fulfilled their duty. And self-respect is a vital ingredient with the Army value of respect, which results from knowing you have put forth your best effort. The Army is one team and each of us has something to contribute.

Selfless service is larger than just one person. In serving your country, you are doing your duty loyally without thought of recognition or gain. The basic building block of selfless service is the commitment of each team member to go a little further, endure a little longer, and look a little closer to see how he or she can add to the effort. 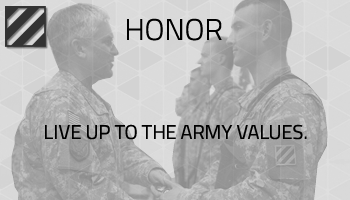 The nation’s highest military award is The Medal of Honor. This award goes to Soldiers who make honor a matter of daily living — Soldiers who develop the habit of being honorable, and solidify that habit with every value choice they make. Honor is a matter of carrying out, acting, and living the values of respect, duty, loyalty, selfless service, integrity and personal courage in everything you do. 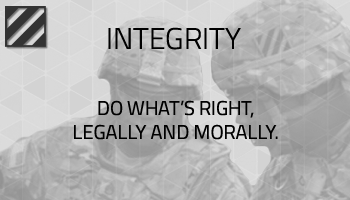 Integrity is a quality you develop by adhering to moral principles. It requires that you do and say nothing that deceives others. As your integrity grows, so does the trust others place in you. The more choices you make based on integrity, the more this highly prized value will affect your relationships with family and friends, and, finally, the fundamental acceptance of yourself. 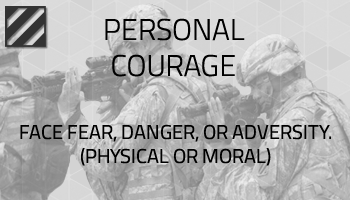 Personal courage has long been associated with our Army. With physical courage, it is a matter of enduring physical duress and at times risking personal safety. Facing moral fear or adversity may be a long, slow process of continuing forward on the right path, especially if taking those actions is not popular with others. You can build your personal courage by daily standing up for and acting upon the things that you know are honorable.

I am a warrior and a member of a team.

I serve the people of the United States, and live the Army Values.

I am disciplined, physically and mentally tough, trained and proficient in my warrior tasks and drills.

I always maintain my arms, my equipment and myself.

I am an expert and I am a professional.

I stand ready to deploy, engage, and destroy, the enemies of the United States of America in close combat.

I am a guardian of freedom and the American way of life.

Competence is my watchword. My two basic responsibilities will always be uppermost in my mind—accomplishment of my mission and the welfare of my Soldiers. I will strive to remain technically and tactically proficient. I am aware of my role as a noncommissioned officer. I will fulfill my responsibilities inherent in that role. All Soldiers are entitled to outstanding leadership; I will provide that leadership. I know my Soldiers and I will always place their needs above my own. I will communicate consistently with my Soldiers and never leave them uninformed. I will be fair and impartial when recommending both rewards and punishment.

Officers of my unit will have maximum time to accomplish their duties; they will not have to accomplish mine. I will earn their respect and confidence as well as that of my Soldiers. I will be loyal to those with whom I serve; seniors, peers, and subordinates alike. I will exercise initiative by taking appropriate action in the absence of orders. I will not compromise my integrity, nor my moral courage. I will not forget, nor will I allow my comrades to forget that we are professionals, noncommissioned officers, leaders!

"The Army Goes Rolling Along"

March along, sing our song, with the Army of the free.

Count the brave, count the true, who have fought to victory.

We’re the Army and proud of our name!

We’re the Army and proudly proclaim:

First to fight for the right,

Proud of all we have done,

Fighting till the battle’s won,

Count off the cadence loud and strong;

That the Army goes rolling along.

Minute men, from the start,

Always fighting from the heart,

And the Army keeps rolling along.

Refrain: (Same as above)

Men in rags, men who froze,

Still that Army met its foes,

Faith in God, then we’re right,

As the Army keeps rolling along.

Count off the cadence loud and strong; (two! three!)

That the Army goes rolling along! (keep it rolling!)

And the Army goes rolling along!

This song was used in the Audie Murphy movie To Hell and Back, based on this autobiography of the same name, and is the offical song of the 3rd Infantry Division.

I Wouldn't Give A Bean

To Be A Fancy Pants Marine;

I'd Rather Be A

I Wouldn't Trade My Old OD's

For All The Navy's Dungarees

For I'm The Walking Pride

On Army Posters That I Read

It Says Be All That You Can,

So They're Tearing Me Down

To Build Me Over Again.

With A Rifle On My Shoulder,

And I Eat Raw Meat

For Breakfast Every Day.

So Feed Me Ammunition;

Keep Me In Third Division,

Recognizing that I volunteered as a Ranger, fully knowing the hazards of my chosen profession, I will always endeavor to uphold the prestige, honor, and high esprit de corps of the Rangers.

Acknowledging the fact that a Ranger is a more elite Soldier who arrives at the cutting edge of battle by land, sea, or air, I accept the fact that as a Ranger my country expects me to move further, faster and fight harder than any other Soldier.

Never shall I fail my comrades. I will always keep myself mentally alert, physically strong and morally straight and I will shoulder more than my share of the task whatever it may be, one-hundred-percent and then some.

Gallantly will I show the world that I am a specially selected and well-trained Soldier. My courtesy to superior officers, neatness of dress and care of equipment shall set the example for others to follow.

Energetically will I meet the enemies of my country. I shall defeat them on the field of battle for I am better trained and will fight with all my might. Surrender is not a Ranger word. I will never leave a fallen comrade to fall into the hands of the enemy and under no circumstances will I ever embarrass my country.

Readily will I display the intestinal fortitude required to fight on to the Ranger objective and complete the mission though I be the lone survivor.